Fukui Prefecture belongs to the Chubu region of Japan and is also a part of the Hokuriku region.

The prefectural capital is Fukui City, which is also a core city, with a population of approximately 770,000 as of 2020. Fukui is not a very large prefecture, ranking 43rd among the 47 prefectures in Japan.

The climate of Fukui is characterized as easily recognizable seasonal changes throughout the year. It is hot in summer and cold in winter. We also have heavy snowfalls.
Kyoto, a major tourist destination, and the major cities of Osaka and Nagoya can be reached by train in a little over two hours, and Hokuriku Shinkansen is scheduled to extend to Tsuruga in 2024. So the access from Tokyo will also become easier.

For the sake of clarity, Fukui Prefecture is roughly divided into four regions. 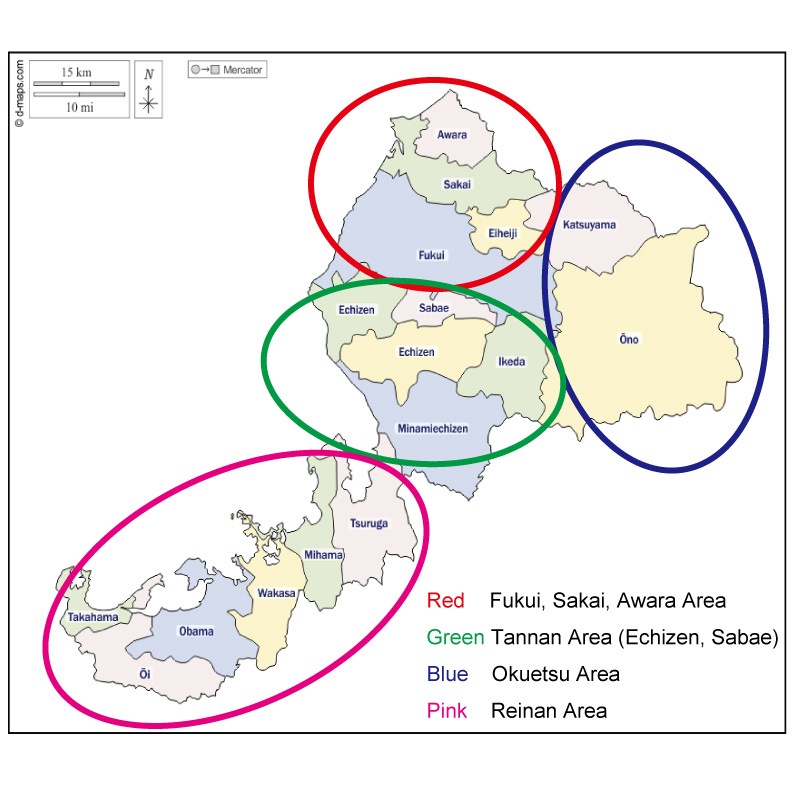 Red circle: The most populated area including Fukui City.

Blue circle: Okuetsu area, which is mountainous and has a lot of snowfall in winter.

Pink circle: Reinan area, which faces the sea and has a different culture from the previous three areas.

This section introduces Fukui Prefecture with a spotlight on each of these areas.

Daihonzan Eiheiji Temple (Eiheiji Town) / Known around the world as a center for rigorous Zen training. It was founded in the 13th century by Zen master Dogen.
Tojinbo (Sakai City) / a precipitous cliff broken by the rough waves of the Sea of Japan. It is a symbolic view of the Sea of Japan in winter.
Ichijodani Asakura Clan Ruins (Fukui City) / The ruins of a mountain castle and castle town where the Asakura Clan, warlords of the Warring States Period, lived.
Awara Hot Spring (Awara City) / Fukui’s best hot spring resort
Maruoka Castle (Sakai City) / The oldest existing castle tower in Japan.

Echizen Washi Village (Echizen City) / Japan’s foremost producer of washi paper. Visitors can try their hand at making washi.
Takefu Knife Village and other Echizen Uchihamono (Echizen City) / With a history of more than 700 years
Nishiyama Park (Sabae City) / A famous park with more than 50,000 azalea plants in bloom.
Echizen Coast/ You will have a lot of fun if you drive along the coast.

Tsuruga Museum (Tsuruga City) / a collection of materials on Jewish refugees who escaped from the hands of Nazi Germany and landed at the port of Tsuruga
Myotsuji Temple, Jinguji Temple and national treasures (Obama City) / Obama City has some national treasures.
Mikatagoko Rainbow Line (Mihama Town, Wakasa Town)/ a road around the Mikatagoko area, including Lake Suigetsu, which is world famous for its annual stripes.

Detailed explanations are provided in the links.

We have not fully introduced all the attractions yet, so we will be adding more content as we go!